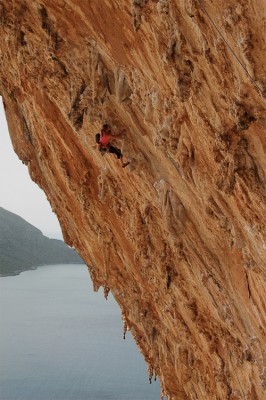 According the site 8a.nu, Kalymnos is currently (2011) the most popular climbing crag in the world! After 6 days of non-stop climbing on Kalymnos I can tell you why. The easy access to exceptional natural rock formations, equipped by the safety standards of an indoor gym, makes it is so easy to get a lot of top-quality rock climbing done in a stunning environment.

Approaches are well arranged and relatively short, the world class routes are lined up next to each other, and they are all very safely bolted. This means that you can efficiently feed your self one amazing line after the other, and have exhausted your biceps well in time for the afternoon sun on the beach.

The list of advantages of Kalymnos as a sport climbing resort can be made much longer;
– the flights are cheap from many cities in Europe (directly to Kos)
– if you have an interest in good food you will eat very well
– accommodation in studios are cheap and practical
– you don’t need a car (a scooter takes you anywhere on the island)
– hang out for climbers is centered and it is easy to find climbing partners for singles
– it is suitable to bring small kids to many of the crags
– the rock dries super quickly, and notably there are rain-proof crags as well as tufa climbs also in the lower grades (from 6a and up)
– perfect destination for rock climbing perfection for all levels
… 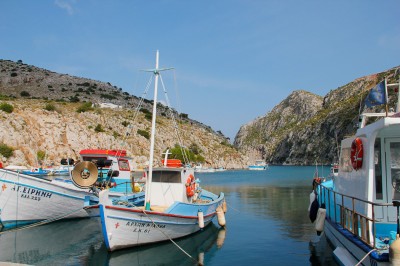 The main business on Kalymnos was earlier the fishing and selling of sea sponges. The business died because of a combination of over-fishing, environmental groups lobbying against it, and the replacement of the product by cheap chemical alternatives. The complementing economic activities consisted of agriculture, fishing, and some summer tourism (July-Aug), but over all Kalymnos was in a time of economic stagnation before the climbers invaded the island.

After the initial routes put up by Italian climbers, Kalymnos municipality in collaboration with Aris Theodoropoulos started to develop and promote climbing on Kalymnos on a bigger scale.

Sustainable and Responsible Tourism by Climbers?

In general climbers are well aware of and concerned about the environmental impact and sustainability of their activity. We seek to justify our traveling around the world in our hunt for the most beautiful cliffs and mountains, by doing our best to minimize our negative impact on nature and supporting the local communities and tradesmen. 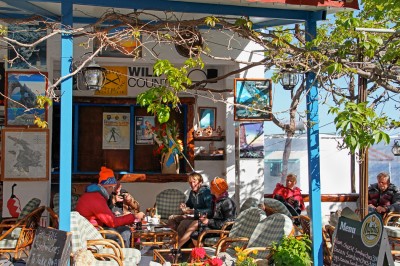 Climbers based tourist economy
It is clear that the climbers have become a very important part of the tourism on Kalymnos, increasing the season from 2 months to almost year-round. The locals have been quick and cleverly adapted their business to this new form of tourism. They have help to develop the crags by lodging experienced route builders and even sponsored them with bolts. This positive reaction have made it possible for the locals to stay in charge of the development and profit from the “new wave”.

As a visitor on Kalymnos I happily spent my money feeling that I was contributing to the local community (and not to some big charter corporation exploiting the locals as underpaid hotel cleaners). However the climbers are so far very centered in Masouri, even though you find as good (or better) accommodation and restaurants in other smaller villages.

Even though popular sport climbing destinations tend to be short lived, changing with the newest discovery in fashion, Kalymnos has such a large potential for further development and the quality of the crags are so high that climbers will likely keep on coming for a long time. When the early developed sectors get too polished the crowds will spread all over the island and it’s satellite island Telendos. 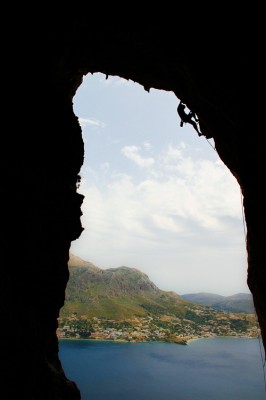 Environmental impact
Environmental concerns are in general not high priority in Greece, and environmental activists have most likely been absent during the ‘sportification’ of the cliffs and caves on Kalymnos. Apart from climbers interests, the development of Kalymnos as a climbing resort by the local authorities is strictly economic.

However, climbers have helped to increase the environmental awareness on the island by organizing cleaning days of the beaches and demonstrated the importance of a clean place for attracting visitors. After the first clean up of Masouri beach this has become a yearly event. Other villages should profit from the motivation among climbers and organize the same; Barbecue & Beach cleaning – who wouldn’t come!?!

Ideas how to reuse your rubbish (since possibilities for recycling are limited) and other ways to make (and keep) Kalymnos clean are shared by climbers for climbers at Reducing our negative impact on the environment by ClimbKalymnos.com

On top of reducing waste and water consumption we must not forget that we are intruding on a very sensitive ecosystem that has previously been completely protected from human activity (isolated micro-ecologies established in caves and on cliffs). Maybe the impact of the intense traffic of climbers ought to be further investigated by experts, to ensure that the biodiversity is not harmed.

With the opening of new sectors one of the tasks is to “clean” the place from loose blocks and too fragile stalactites, as well as bushes, lichens and mousse covering the holds. This process is completed by the actual climbing during the first years of repetitions of the routes. 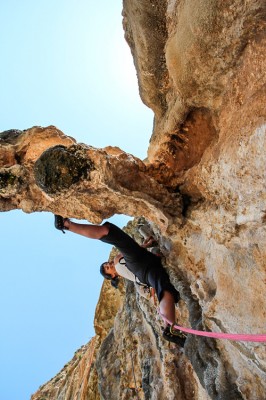 Other then possibly killing your belayer, braking of a tufa formed during millions of years makes you feel like you broke the nose of the Great Sphinx of Giza. At the same time it is preferred that people enjoy this exceptional places that would not have been visited otherwise. By starting the debate and involving ecologists in the development of crags on Kalymnos, we can avoid doing the same mistakes that are now venturing the access to many climbing sites in central Europe.

The local authorities have after all proved to be protective of their natural heritage by having limited the number of routes in Grande Grotta above Masouri. Regarding preservation of the biodiversity there might be initiatives that I do not know about, we’d be happy for all comments enlightening this subject…

– All other useful information, from the history of Kalymonos to upcoming climbing events and new routes, at climbkalymnos.com
– More photos in our Facebook album Sport Climbing Kalymnos and Geyibayiri
– Mountain Spirit Guides offer rock climbing courses at various destinations.

Climbing Kalymnos May and Oct 2011