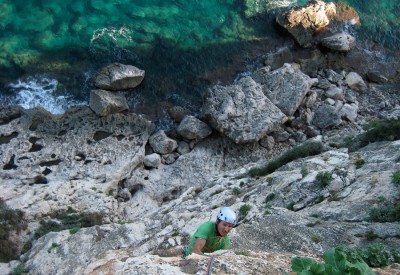 Another climbing trip to one of our favorite destinations – Sardinia!
This time we made a little round trip to check out the climbing, beaches, food and atmosphere in all corners of this rocky paradise island.

Starting out in Cala Gonone, located in the middle of one of the most fascinating stretches of coastline in the Mediterranean; Golfo di Orosei. The evocative landscape is framed by red porphyry rock and grey and yellow lime stone with white sand beaches. Shrubs and trees are clinging on to the steep sea cliffs seemingly reflecting in the green-blue water below. The environment is uncontaminated, the sea is crystal clear and the towns are clean. 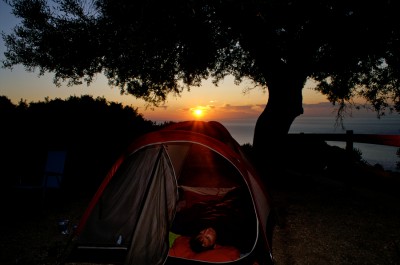 In Cala Gonone life is easy and the limestone crags offer all the types of climbing you could wish for. Waking up under an olive tree at sunrise every morning, having double cappuccinos and ‘brioche con crema’ for breakfast, we are ready to climb hard! It is time to push the grades on the interestingly textured lime stone in Arcadio and the Millennium cave. Norwegian Lars and Ida, Danish Jesper and Line, and argentinien Octavio, all from Chamonix join us on the Agriturismo where we feel very much at home.

Cala Gonone is popular not only for its excellent and varied climbing crags, but also for the many beaches close to the crags and tourist facilities such as restaurants, cafes and holiday apartments. By renting a rubber dinghy in Cala Gonone you can reach the climbing on Cala Goloritze and in Cala Luna via the sea. These little boats are also great for visiting the different beaches along the coast, and snorkling and spear fishing among the reeves. 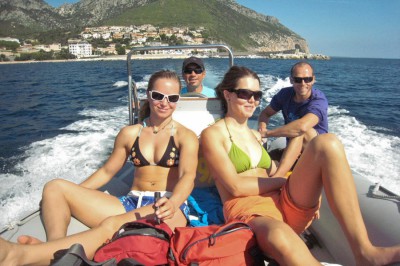 Golfo Di Orosei is charcaterized by high cliffs (up to 500m) with a sheer drop into the sea, interrupted by needles, pinnacles and grottoes caused by the phenomena of errosion. These walls and pinnacles offer adventurous mulit-pitch climbing. Some are reached by boat only, such as Punta Plumare, a serious undertaking with difficult retreat. Others are more easily approached by rappells from the top, like Apriti Cielo, next to the Millennium cave.

Crossing the island, changing sunrise for sunset, we climb in the areas around Iglesias and Domusnovas.
The south-east corner of Sardinia has an almost African athmosphare with ancient remains from various succeeding cultures, dating back to the 4th century BC, long before the Italien mainland was inhabited. This area sees less beach-tourists and is therefore cheaper. Wild camping is tolerated, restaurants are mainly pizza places and the ice-cream is out-of-season already in October. We do find our favorite morning cafe in Domusnovas tough, providing the best ‘con cremas’ found so far on the island!

Pan di Zucchero is a 130m high rocky islet, earlier used for mineral extraction, that is now attracting a handful curious climbers looking for an extraordinary experience. For sport climbing, the crags around Grotta di San Giovanni are of better quality though. The newly bolted sector of Technicolor is a feast of technical and sustained tufa climbing. 7a/b routes lined up one after another…

Having a rest day, we drive to the very south tip of Sardinia and then up to Cagliari, an ancient city, rebuilt after severe bombings during the 2nd world war, and also the islands capital. There is lots of bouldering potential along the coast, but nothing yet developed south-west of Cagliari. The spectacular rock formations are like children playgrounds, but the time in this area is also well spent snorkling and sun bathing on the warm, rounded rocks. 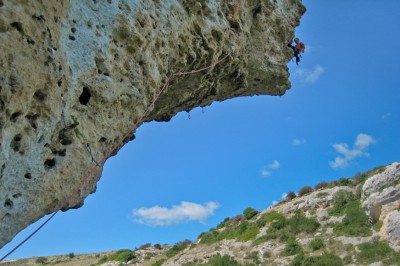 Well rested it is time to go to Isili – overhanging heaven! The classic area is a small valley full of frogs, hawks, horses and cows, and a very particular type of rock. The walls look like planets from outer space, covered with all types of holes from crater-sized to one-finger pockets, and always overhanging.

The belayer needs to turn his back to the wall in order to watch his partner climb. The confused climber is trying to differ up from down in an unknown 3D environment. The climbing in Isili is a lot of fun, but hard on both biceps and fingers.

Before returning with the over-night ferry from Olbia to Livorno, we also have a look at the north-east coast. A big contrast to the rest of the island. Far more posh and touristic, full of fancy holiday villas and fenced off private land. But the spectacular rock, eroded not only from water and wind but also from the inside by some chemical reaction, stays the same. Beautiful and impressive! 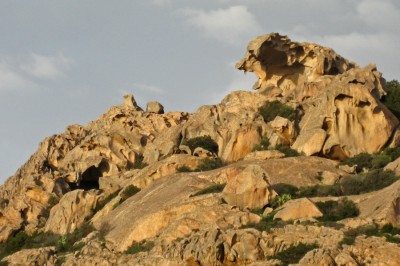 More photos and impressions from Cala Gonone from our climbing trip to Sardinia 2008
See also Rock climbing courses on Sardinia.