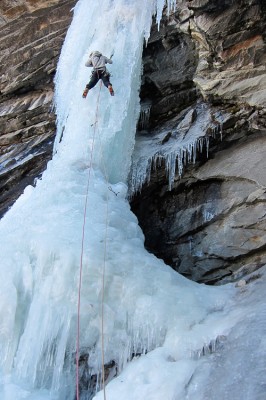 In general there was less ice then what I have seen the last few winters in Cogne at this time of the year. The recent warm weather has made the ice white and thin in most places that are exposed to the sun. Heavy traffic has also contributed to chopping off the ice from certain pillars and cigars.

Still there is lots to climb on the west side of Valeille (rive droite) as well as far into Valnontey.

The right start of Cascade de Lillaz was not climbable, too much running water.
The easier start on the left is doable, and then the steeper section in the middle of the canyon is also ok. High up on the slab the ice has taken too much sun and is melting away.

The first 35m pitch of Stalattite Di Cristallo is formed, and in pretty good conditions although the attachment of the ice at the very top is thin. Above that pitch there are only small icicles, no formed ice falls, however big enough to hurt should it come down on somebody in the afternoon sun.

First pitch of Stella Artice is ok, although alomst see-through. The freestanding pillar on the 2nd pitch looked like it had seen too much traffic and we noticed some horizontal cracks on the top of it, so we stayed clear of that one. 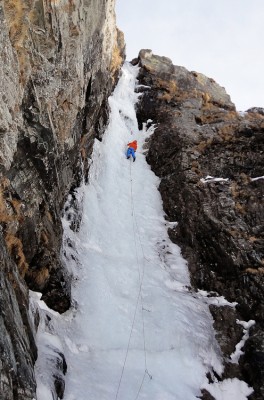 Cold Couloir was in good condition (although we only climbed the first 4 pitches). It also takes a fair amount of sun in the afternoons though, but should stay fine for a while.

Candelabro Del Coyote was clinging onto the grass and was certainly to much of a shower for our taste. There was not so much ice left on the 2 bottom pitches.

Several teams were on Tuborg this day, and it looks still fine. Hopefully it will be saved during the coming week with colder temperatures.

Monday Money is in great condition as well as the Cirque di Patri. Fellow climbers also reported Repentente Super and L’Ago di Money (the left line on the photo, which is often a mixed route but now all ice!) to be in very good condition this day.

The week following our visit, temperatures has been colder again, so I’d assume the conditions to be the same or better right now.

– More photos in our Facebook album Climbing Ice Falls In Cogne (older photos too where you’ll see the difference regarding the amount of ice).

– More about what to climb in Cogne
– Contact Mountain Spirit Guides for guiding or ice climbign courses.