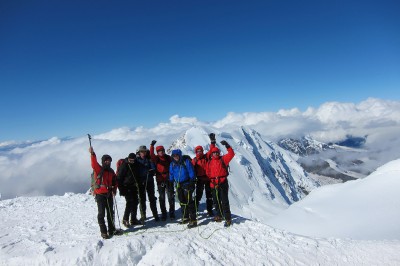 To climb the relatively easy 4000m peaks in the Alps you still need to have basic mountaineering knowledge in terms of glacier safety, rope work, using crampons and ice axe, and adapting to the current weather and snow conditions. Or you are a good winter mountain walker climbing/hiking together with a mountain guide. However, some alpine 4000m summits are accessible to mountaineers without much technical climbing capabilities via their “normal routes”. Once properly acclimatized, several spectacular 4000m summits are achievable for most mountaineers with basic skills. Going for your first 4000m peaks summertime, Chamonix is a great place to start to acclimatize by doing some shorter classic alpine climbs at increasing altitudes, such as Aiguille du Tour (2 days), and Pointe Lachenal followed by the traverse of Vallee Blanche (1 day). 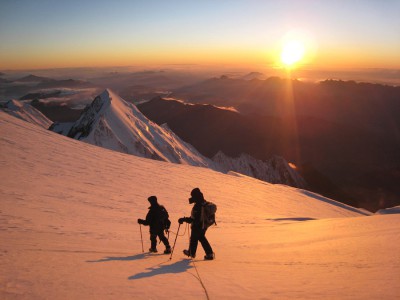 Just one hour from Geneva, Chamonix also provides a good base from where you have easy access to the Mont Blanc massif, the Grand Paradiso and the Valais and Monte Rosa mountain ranges. If you are flexible you can almost always find good weather somewhere in the Alps thanks to the different weather fronts affecting the different regions. Driving from Chamonix to the Aosta Valley and up Val Savarenche (2 hours) you can climb Grand Paradiso (4061m) by staying one night in the Vittorio Emanuele or the Chabod refuge. Both huts provide good Italian food and a friendly atmosphere. The terrain is varied with a long, dull approach, some steeper snowy sections and an aesthetic final rock scramble to the summit. This peak is commonly climbed with skis and skied in the springtime. For climbers on foot the season starts in June, which is the case for all the peaks below. 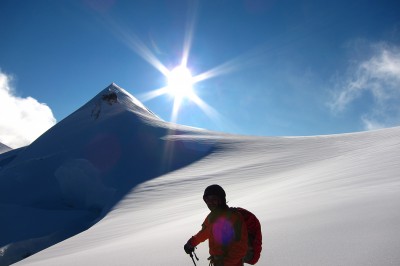 Another option is to ascend to Mantova or Gnifetti hut from Gressoney or Alagna in Italy and climb several of the 4000m summits in the Monte Rosa Massif. The Monte Rosa has the highest concentration of easy 4000m peaks in the Alps. Accessible by hiking rather then climbing is Pyramide Vincent (4215m), Schwarzhorn (4322m), Blamenhorn (4167m), Punta Giordani (4046m), Zumsteispitze (4563m), Signalkuppe (4554m), Parrotspitze (4432m) and Ludwigshöhe (4341m). Continuing to Zermatt you can make a two-day tour and climb Breithorn (4159m) and Pollux (4092m). Taking the lifts from Zermatt to Klein Matterhorn you can climb Breithorn on the way to the Ayas Hut (3394) and spend the night there. This mountain has a peak that is over 2 km broad, a south face of snowy slopes and a north face of vertical rock and ice. The west summit is reached easily after a short snow walk. 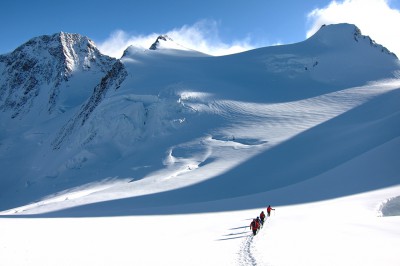 Climbing Pollux by the south-west ridge the next day, you get to climb some rock too. The rock scramble is facilitated by fixed chains on the hardest sections and finishes up a snow arete that brings you to the panoramic summit. These are two easy 4000m peaks in a beautiful area with great views onto the Matterhorn and the Monte Rosa. In the very eastern part of the 4000m range of the Valais Alps, the Weissmiess (4023m) is a popular peak for less experienced mountaineers. Accessed either from the Almageller hut, by the rocky south-east ridge, or by taking the cable car from Saas Grund to Hohsaas, climbing the glaciated north-west face. Combining these two diagonal routes, traversing from the Almageller hut to the Weissmiess hut, makes a complete alpine adventure. 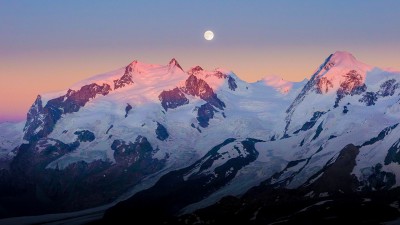 By spending a week in alpine terrain, climbing 4000m peaks in the Swiss Valais, you can gain a lot of confidence as a mountaineer. Some of these peaks are often climbed during introduction to intermediate mountaineering courses, aiming to teach you all the basic mountaineering skills needed to continue climbing on your own.