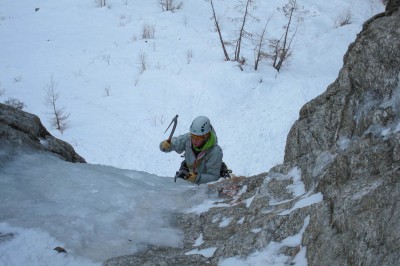 The question is: Is ice climbing fun? Or should anyone that is not a hard core alpinist or grew up in northers Scanidinavia stay away from this sport?

Even though I was already an accomplished rock climber and keen mountaineer and skier, climbing icefalls never really appealed to me. I had been a few times, but only as a last resort, on winter days when the snow conditions were bulletproof, or visibility was zero. I had the idea that ice climbing was a pure hassle and involved a lot of suffering – Frozen carabiners and ropes to manage with your gloves on, ice lumps falling on your head, and above all freezing cold! Risking seriously long falls dressed in an armor of sharp tools, also seamed kind of dangerous to me. I completely understood why so few skiers were into ice climbing, they’re just too clever.

But then I thought again; Wasn’t rock climbing also a hassle and a bit scary in the beginning when I didn’t know how to handle all those ropes, slings and protection devices? I wasn’t particularly over excited about climbing multi-pitch trad routes to start with, and now that is what I am the most excited about! So maybe ice climbing deserved a chance too..? 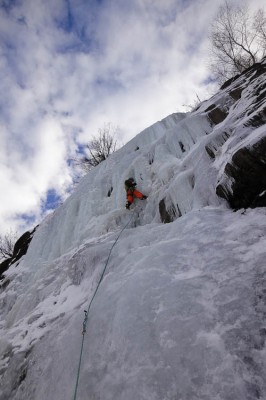 Already on my first day out I discovered a lot of pros with ice climbing compared to other activities around Chamonix; No need to get up at 7am since there are no queues to beat, and no need to worry about the weather (as long as you stay down in the valley and not in a place exposed to avalanches). Cloudy, foggy, snowy or windy… padded up like a michelin man in my down jacket, fleece pants and gore-tex suit it is quite cozy anyway.

Ice climbing (in its less extreme forms) proved to be quite contradictory to my former believes. When well formed, icefalls are pretty solid after all. There is no need to stress yourself to tears neither, top-roping is fun too! In fact it doesn’t even have to be unpleasantly cold. Some times we are climbing ice in the sun, -3 degree Celcius, the ice is sorbet-soft (so that even I can get my axes in there), and often you find yourself in absolutely magic surroundings.

After a few days out ice climbing in the Chamonix valley I had a better feeling for when the axes and crampons stick to the ice and when they don’t. I’m no longer scared of falling off just because I don’t have my axe placed with the full length of the blade in the ice. I also learned that I can stand well on my feet and not progress only by doing pull-ups in my axes. As I got more relaxed it started to get really fun. I have realized that most people climb icefalls with a good margin of capacity when leading, but also that you need a strong head to always climb at your best in this dynamic and uncertain environment. 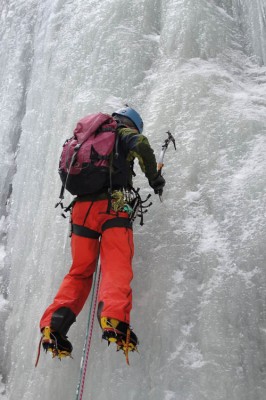 This winter (Dec 2010 – Jan 2011) we’ve been around for quite a few days of ice climbing in the Chamonix valley. Some ice falls are well formed and others are still thin or wet. Below are a few suggestion for a day out – not too big of a mission and no scary stuff! Grades 2-4.
You find them all in the guide book “Cascades autour du Mt Blanc” by Damilano/Perroux. Consult this guide book for further descriptions of access and maps.

La Cremerie – Argetiere
About 20min walk from the Cremerie above the Grands Montets cable car station, is a popular sector for ice climbing introduction. Here we found two wide ice falls for easy introduction with a few snowy sections. Then a 60m long pitch with a 10m almost vertical section that was interesting.

Mur des Dents de la Mer – Rive Gauche Argentiere Glacier
Above the Cremerie, higher up towards the glacier is a sector with a few nice lines of grade 4 climbing, Mini Couloir and Deferlante. They form quickly and are often in conditions thanks to the shady spot and higher altitude. The access is shortest from Lognon (Grands Montets mid-station), you traverse in the piste towards Argentiere glaier and then rappel down the ice fall you want to climb. The setting is impressive, right next the the active end of the glacier.

Col de Montets
On the top of the col, you see the icefalls on the right of the road when coming from Chamonix. It is just 10min walk from the car and it is partly in the sun most of the day. Great for a day out! From right to left: Two short but thick, almost vertical icefalls are formed. Then there is a 60m icefall, easy in the start then a 10-15m vertical section. On the left there is a 130m icefall also in good condition of maybe 3+ climbing.

Le Chapeau – Gorges du Bas
The ice here was (around New Years) still a bit wet and the falls not completely formed. The approach (45min) is not obvious, but therefore a bit more adventurous. Walking from Lavancher toward the Buvette de Chapeau, just before reaching the big couloir below the cascade du Chapeau, a small trail is descending towards the gorge. Crossing the big couloir the trail follows a ledge traversing below the slabs. There are some iron foot steps and rails to follow unless they are covered in the snow. Reaching the end of a rocky buttress you have the easiest icefall coming up in the couloir on your left. Rappelling from the lowest tree in that couloir you reach the bottom of the gorge with 2x60m ropes. You can climb back up where you rappelled on the grade 2 icefall (60m) or the one left of it (grade 4, 80m). 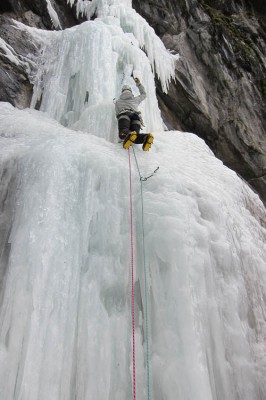 Barre des Charcotins – Trient
The best way to walk there is from Col de Forclaz following the snowshoe trail traversing along the south slopes of the valley overlooking the village of Trient (approach about 1h). In December the sun doesn’t yet reach the icefalls, but later in the season it will. At the far right of a serie of wide ice falls, there are a few variation of a 200m icefalls in good condition, with sections of grade 4 climbing.

Le Châtelard – Secteur du Pesseux
About 500m after the Swiss border you get a glimpse of the icefalls from the road. You can walk up from here, but the shortest and easiest approach is from the village Les Grangettes above. By the main waterfall, the first pitch of 20-30m, grade 3, is climbable, but a lot of water is running beside and behind it, so I do not recommend it unless it gets colder again. The Frigor (4+) is in better shape (at least up to the freestanding part in the end).

I can hight recommend people to explore this vertical ice-world. Most often it will take you to some stunningly beautiful places, it is great fun, and a good preparation for bigger adventures in the mountains.
Surely I often do get cold fingers and I occasionally swear at my equipment or get scared… But should you get frustrated about the cold, your non-cooperating ice screw, or about ripping you new gore-tex pants with your crampons, there is no better anger-reliever then the frantic hitting and kicking that ice climbing is all about. So in the end you go home happily exhausted.

Images from the ice falls