Meteora is a place full of history, both climbing and cultural wise, the landscape is stunning and the food is excellent.  The climbing history goes back to ancient times, when the local farmers took their animals to the top of the steep conglomerate towers to protect them from invaders and thieves.

From the 11th century onwards monks settled on the summits of the otherworldly forest of towers and today there are six active monasteries left on top of the towers of Meteora.

The development of modern rock climbing goes back to the late seventies when Dietrich Hasse and his friends started to open more and more routes in the area. Today there are hundreds of climbing routes in Meteora. Most of them have an adventurous character, opened in the typical style of the region – ground up, by both local and foreign climbers.

There are routes up to 300m long of all difficulties. Meteora rock climbing is a truly unique experience to most people around the world. The views, the feeling of the rock, and the particular style of climbing is very different to most other rock climbing destinations.

World class lime stone sport climbing can also be found in surrounding areas, as well as further south on the Peloponnese. 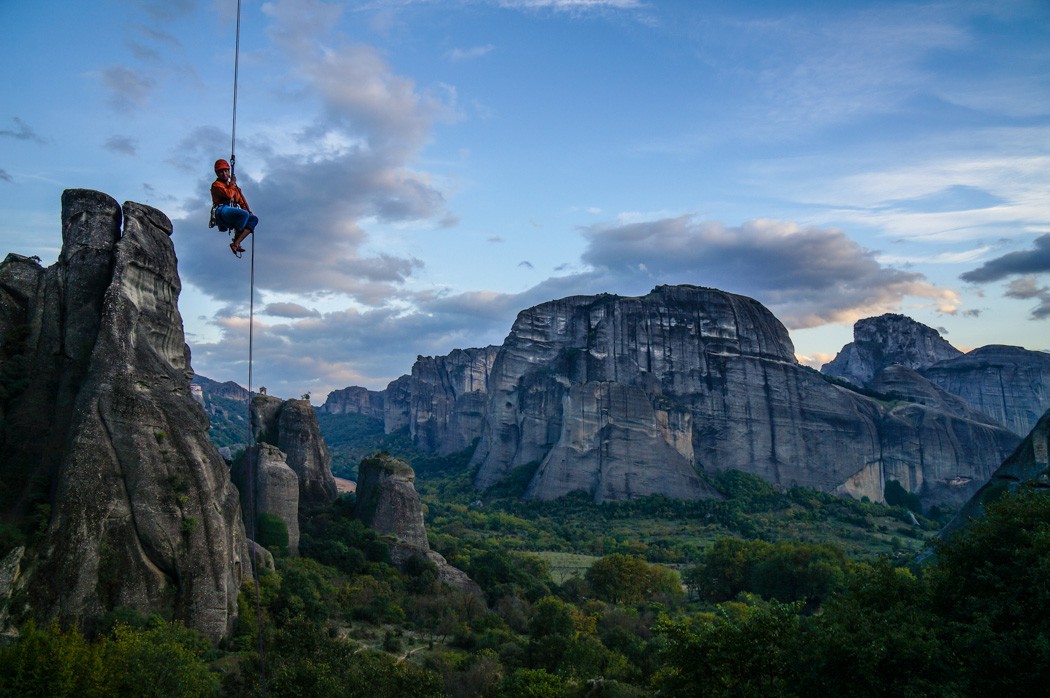 We meet in Kalambaka, from where we choose different climbs each day and explore the towers of Meteora.

We choose our routes daily according to your level of climbing, with the aim to stand on top of as many different towers as possible.

Duration:
4-7 days of rock climbing.
The program can also be combined with climbing on the Peloponnese peninsula.

Best time:
Beginning of May to mid June, or October to mid November.

Who is this program for:
Meteora is for anyone who is up for a rock climbing adventure in a truly unique and historic place with. You should have some experience climbing single pitches indoors or outdoors.

How to get there:
Flights to Athens are cheap and from many European towns you find direct connections. From Athens its either by car (4h) or by train to Kalambaka.