A Touch of Spring – Chamonix March 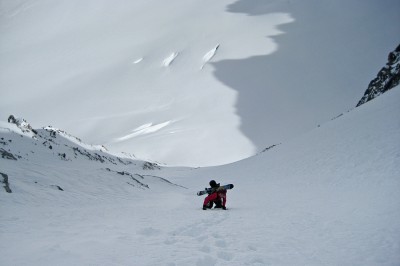 Spring definitively established itself in Chamonix during week 11. The snow on mountain south faces got heavy and started its transformation into corn/slushy snow. There was not much precipitation happening this 3rd week of March, so ski touring and ski mountaineering was the obvious choise for most off-piste skiers in Chamonix.

Sun-exposed slopes below 2500m now has a crust layer on top, but there is not yet proper corn snow to be skied. Therefore we have skied in higher altitude on shady slopes, while often climbed up in the pleasantly warming sun.

Ski mountaineering, involving both skinning and climbing with your skis on your backpack, we skied runs such as Col de Cristaux in the Argentiere basin and Breche Puiseux in the Periades. On descents such as these – just briefly touched by the sun – the snow was soft on top and firm but grippy compact powder underneath. Skiing this kind of smooth and stable ground can be really fun if just the surface is soft. When steep, it demands short turns in perfect control.

Ski touring in the Periades is a great day-tour option from Chamonix. The ridge-line stretches north from Mont Mallet, in-between Mer de Glace and the Les Chaux glacier, and offers skiing on both the east and west sides of the different cols. First you get a warm-up bonus run from Aiguille du Midi on the Gros Rognon variation down to Mer de Glace. Then about 700m of skinning and 200m of boot packing to one of the cols. Then lot of options for skiing again back to Mer de Glace and the Montenvers train station, or all the way to Chamonix. 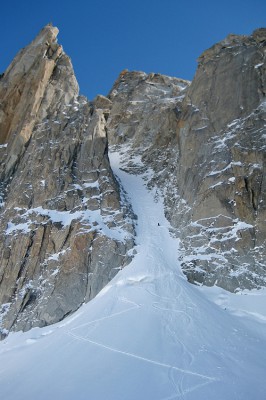 We also had a great day ski touring to Point de la Terasse, in the land of the sporty ski mountaineers, where you get no help from lifts on your way up. Since starting the walk through dense forest, a different world opens up to you above the tree-line. Even higher, once reaching the summit ridge through Col de la Terasse, an all-inclusive panorama of the Mt Blanc mountain range is layed out before you – from Mont Blanc to the Aiguille du Tour, with the Alaska-like north face of Mt Buet and les Aiguilles Rouges in the foreground. Skiing a hidden north-east face in loose sugary snow followed by creamy south facing slopes lower down, this long day was truly a complete ski tour.

Finally, on the 21st of March we got some new snow above 2500m. First day after we had great skiing from Aiguille du Midi. The snow was cold powder on shady slopes above 2500m, but the air temperatures reminded us of the skiing days we had last year in May!
The rain that fell below 2000m definitely ended the skiing down to the valley floor and the warm temperatures sent numerous wet avalanches down mid-mountain slopes. The pistes in Flegere got severely damaged by avalanches from above and couloirs in the lower parts of all Chamonix lift systems slid to the ground.

Staying up high, skiing various runs on the Vallee Blanche and ski touring in the Cirque Maudit and the Periades, there was plenty of fresh tracks to be made as long as the weather was clear. We skied off Tour Rond in the west couloir and off Aiguille du Tacul in sluffy powder.

Aiguille du Tacul, the most northern peak on the ridge of the Periades, ends in a rounded cone with numerous couloir down to where Mer de Glace meets Les Chaux glacier. Close to the summit, the NE shoulder offers a great ski with a small rappel or jump half way down.

End of week 12 brought unstable, colder weather with heavy precipitation and strong winds. The already good skiing conditions thus getting even better! Powder skiing on Grands Montets was crazy fun as always, but it is amazing how fast we all can paint this entire mountain in stripes! The top-lift remained closed during the weekend due to winds of up to 100km/h. Aiguille du Midi noted 60cm of fresh snow on Sunday morning (28th of March), but few people were fast enough to make a descent while the visibility was decent.

Skiing goes on! There will be happy easter skiers in Chamonix next week =)