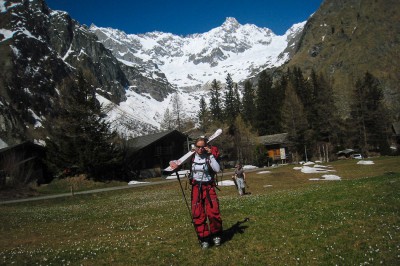 After the Easter holidays Chamonix gets quiet. The town is now all green and flowery, snow is settling on the high mountain faces, and barbecues are held everywhere (even on Mer de Glace!). We have been busy ski touring and ski mountaineering around Chamonix, escaping the pollen invasion by staying in the mountains, but occasionally coming down to attend a barbecue or two… This is holiday times for us in Chamonix, and we will keep on skiing as long as the snow is there (probably another 3 weeks).

Updates on the blog about the skiing conditions in Chamonix have thus been absent since the first week of April. But there has at least been a steady stream of photos posted on Facebook, and we have made 4 photo galleries from big mountain ski tours. 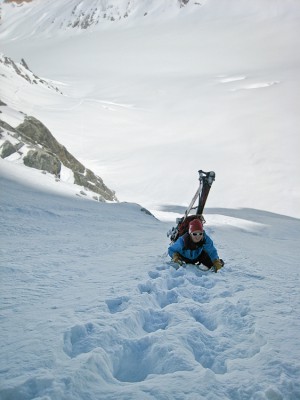 Week 14, Wolfgang spent ski touring in the Lyngen Alps, Noway, hitting the perfect weather and spring-snow conditions. In Chamonix we were still skiing powder, but the fresh snow got quickly heavier and the avalanche accidents were frequent in Haute-Savoie.

The week after, the valley didn’t see much fresh snow, and the snow settled. Ski touring in the Aiguilles Rouges was still on as well as the glacier runs in the Swiss side above Le Tour, even though the snow cover on the trails out to the valley roads started to break up. Typically we skied powder up high, possibly a short section of crust, and transformed spring snow lower down.

The last two weeks 16 & 17, is normally considered as late- or even off-season for skiing in the Alps. There is a lot less holiday visitors coming to Chamonix due to the closing of the lift systems and uncertain snow conditions.

This time of the year is not like in the powder season when you easily find exceptional skiing every day, now you need to be patient and wait for the right conditions. We take the time to do big ski tours with friends. There has been only a few light snow falls, and the snow has transformed to compact spring snow also in the high mountains and disappeared completely from the lower slopes.

Grand Montets have still been a busy place in the mornings, due to lots of keen alpine climbers, randonneurs and extreme skiers running to reserve “their route” in the Argentiere basin. Also the time to ski Mont Blanc is here and almost every day more tracks have been added to the north face.

However some really impressive serac falls have occurred, and getting to Mt Blanc is a bit complicated and involves a certain risk via the popular routes.
Witnessing the serac fall from Glacier Rond triggering an enormous avalanche, definitively put us off regarding all skiing below the west side of Aiguille du Midi, but many people still do this traverse on their way to the Grand Moullet hut.

Temperatures have been rising through out April pushing freezing levels up to 3500m during the days, but in general, refreezing of the snow over night have been good thanks to clear skies. To ski or climb safely, earlier and earlier starts have been necessary. Many ski tours now requires sleeping in a hut and to start skinning before sunrise.

For example, the last two east faces we skied (of Point d’Orny and the Col Sup du Tour Noir), we skied in perfectly soft surface-snow with a still solid base at 9am. This also allows to ski the lower glacier slopes before the snow gets too warm. 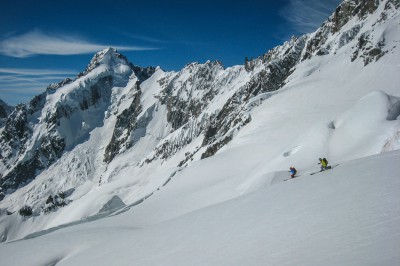 The sunny and warm weather has allowed both day tours and multi-day ski tours in the area. One tour has led us to the next as we have screened the mountain faces for runs in good conditions.

On the 16 of April we climbed Aiguille d’Argentiere and skied the Barbey couloir, a north-east face that at the time still had powdery snow. On the mountain opposite on the Swiss side we found our next objective – to ski the NW face of Grand Lui. Returning one week later we skied this in perfect corn snow in the afternoon. The views from the summit of Grand Lui revealed the great looking ski down the east side of Col Superieure du Tour Noir, which we returned to ski in the early morning a few days later. 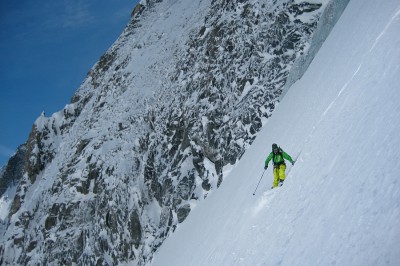 Many lines in the Argentiere basin have been in good conditions both for skiing and ice/snow climbing. On April 18 we had great powder in the bottom half of Col de Courtes, but did not go to the top due to changeable snow conditions. Sitting on the glacier down in the Argentiere basin can be highly entertaining on a sunny day, watching skiers coming down all the impressive lines on the north faces.

We have visited two mountain huts recently, Refuge d’Argentière and Cabane Treint. Both are newly renovated huts with very friendly staff. The huts were not too crowded even in the weekend and the visits were over-all good experiences. 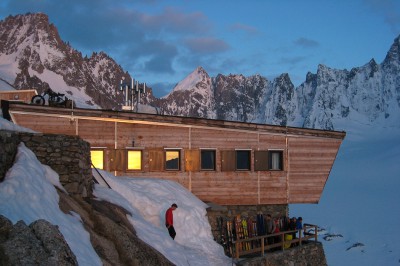 On all the lines we have skied (except for the Barbey) we have been alone. It is very nice not to have any stress, racing other parties when climbing up or skiing down steep couloirs for example. Also the mountains make a wilder impression when no one is around.

This weekend (already started friday afternoon) a lot of precipitation is forecasted and the falling temperatures will hopefully bring snow down to 1800m. Meaning that this was not at all the end of the skiing season! 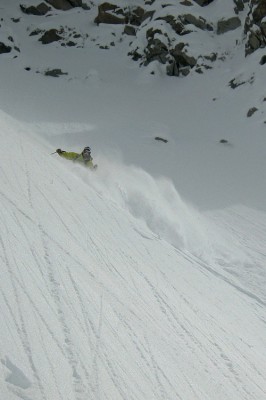 Until the 16th of may snow kept falling above 2000m every afternoon in Chamonix and we enjoyed the powder skiing off Aiguille du Midi. Often the powder was waist deep and most days only a few people were up there. Even though most people in Chamonix have stashed their skis in the basement and oiled up their bikes and climbing gear, lots of enthusiastic skiers showed up in the weekend for a last powder feast – skiing was just too good! All possible lines on the west and north side of the Midi was skied as well as plenty of variations of the Vallee Blanche.

Check out plenty of powder shots on Mountain Spirit’s Facebook Page.
Also enjoy the little video from skiing off Aiguille du Midi by our friend and colleague Asmus Nörreslet.

Once it stopped snowing the Mont Blanc massif got hammered with strong winds followed by more normal end-of-May temperatures. In the high mountains, north faces turned into chalky, compact powder and crust formed on the south faces. 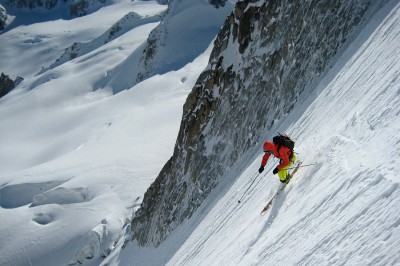 We skied some great lines in the Cirque Maudit after sleeping in the Cosmiques hut, feeling fortunate to be in that area this quiet time of the year. The skiing all the way down to the Montenvers train afterwards is starting to become a hassle in the end though. However, the opening of the Panorama lift between Punta Helbronner and Aiguille du Midi is planned on the 28th May and easy access to the high Vallee Blanche area is guaranteed once again.

We also got the opportunity to ski Dômes de Miage North Face.

Skiing in Chamonix in May is mostly enjoyable for the highly motivated, expert ski mountaineer. It requires lots of experience and patience – but when it’s good it’s good!