Starting out from Barcelona (cheap flights and cheap car rental) there are many world famous climbing areas to visit within 3h drive; Siurana, Margalef, Rodellar, Riglos etc. With 2 weeks of climbing we wanted to combine adventurous multi-pitch climbing in Riglos and hard sport climbing in Rodellar.

Info and photos of this place is easy to find on the internet, it is very photogenic!
Situated in a magic dry-spot at 600m of altitude, 40min drive from Huesca, the town gets 300 days of sun per year. The rock towers are literally hanging over the charming little village that contains a few streets of merged stone houses, a church, a basic supermarket, 2 large parking lots, and a refuge. 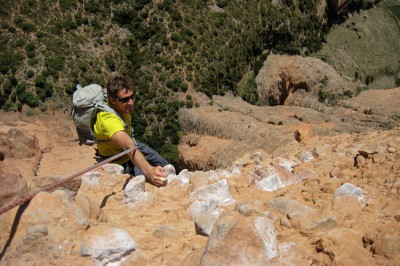 The 300m high conglomerate towers are one of a kind. Consisting of rounded rocks of all sizes from eggs to pilatus balls glued into an orange mud. On top of that it is greatly overhanging! Why would you build your home under this potentially rock-firing giant? And much less try to climb it!? Well the brave pioneers of the 60s did. First ascents were serious aid-climbs taking several days and a few peoples lives. But thanks to them, and thousands of climbers repeating their routes, the rocks left in the natural concrete are only solid ones. At least as long as you stay within the white ant-trails marking the popular routes.

This fact takes a bit of time for your mind to realize though. You also need to get used to the exposure and the space between the bolts (even though most routes are re-bolted they have kept their original adventurous character). Therefore we spent the fist day climbing easy routes in the grades between 5c and 6b. Recommended routes are the normal route on the free-standing pillar Le Puro and Mosquitos on La Visera (the overhanging tower on the very right). A step up is Murciana o Alberto Rabada on the Pison (the big tower on the left). 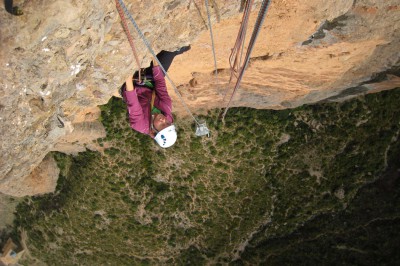 Later on we also climbed El Zulu Demente and Fiesta de los Biceps on La Visera. El Zulu Demente is topping out through the very lip of the Visera overhang, and that is where you struggle with the crux moves of the route (7a+). The previous 250m is sustained 6b climbing on big jugs. The higher you get the steeper the wall, looking up you see as much rock as sky.

Fiesta De Los Biceps we found a bit harder. We divided it into 7 pitches. Second pitch is then a technical 7a, quite unlike the jug-feast following after. It is an amazing route and your biceps do get tired in the end. 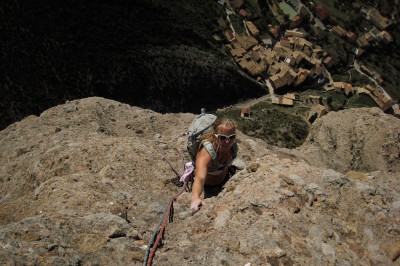 The last week in October we had perfect conditions. Temperatures were good for climbing on the south facing towers on both sunny and cloudy days, and camping life was still comfortable.
The refuge offers rooms and dinner for 20€ per night, but a lot of climbers just stay outside on the parking. The guide book you find in the alimentary shop or the climbing shop in Huesca.

In the weekends it gets busy. A lot of French and Spanish climbers and also base jumpers come to mix with the long term visitors from all over the world. Even though the style of climbing is as close as its gets to an indoor gym, the climbers here seem more alpine-oriented than in sport climbing places like Rodellar. Many routes requires a small rack of complementary cams and nuts.

Walking 10 min from the picturesque village of Rodellar into the Mascun Valley you are in lime stone heaven! The Mascun river runs deep down in the gorge on which side you find huge overhanging caves, pinnacles and amazing arches. The atmosphere is breathtaking the urge to climb is irresistible. 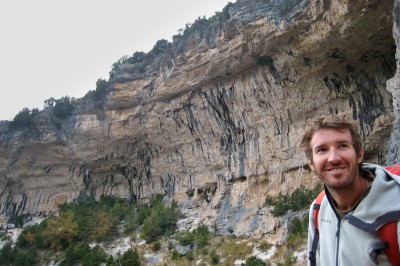 The week before our arrival in Rodellar the region was unfortunately hit by 4 days of heavy rain. This ruined many of the popular routes in the sectors Grand Boveda and Las Ventanas for the rest of the season. Even though the routes are overhanging and protected by roofs the water sips through the rock and runs along the characteristic tufas. Still we had plenty of climbing available to fill our week.

Most routes, 200 in total, are steep and powerful in the grades from 6a to 8b+. Pince Sans Rire became our favorite sector, if you have to choose one. Many beautiful lines on slightly overhanging tufas. We probably climbed most of the 7a+ in the valley and were constantly wishing we could climb harder… Just seeing the lines in Rodellar gives you motivation buy that indoor gym pass and stick to your winter training program. 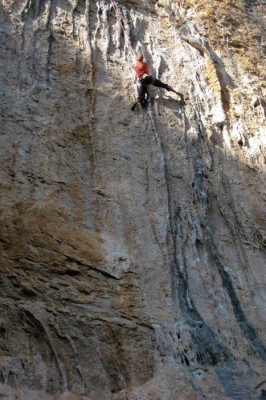 Rodellar offers a good base for longer rock climbing trips. The bar and restaurant at Refugio Kalandraka is the central meeting point and main hang-out for rainy days. Free WiFi, good coffee and massive lasagnas for hungry climbers. We really liked the place and met lots of friendly people.

More photos from the trip and the routes.