An Introduction to Avalanches

At the moment, most ski areas around the Chamonix Valley are in a state of considerable to high avalanche risk. The combination of lots of new snow, wind and big temperature changes, has brought unsettled layers of snow that easily slides down the slopes. Already 2 young people have lost their lives in Le Tour this winter, which is extremely sad.

Ignorance and lack of knowledge put many people on the mountain in danger. So to augment the knowledge and awareness among our clients and readers we would like to provide some information about avalanche safety. I will start with a basic comprehensive introduction to avalanches and risk assessment.

What is an avalanche?

An avalanche is a rapid flow of snow down a slope. Avalanches can set off either spontaneously, triggered by natural phenomena, such as snowfall, rain and sun radiation, or be set off by skiers and hikers. In mountainous terrain avalanches are among the most serious objective hazards to life and property. In the Alps they are the principal cause of mortal accidents. Therefore it is important for skiers to be able to identify the probabilities of slides, to localize the risk zones and to be well informed about the snow conditions.

Slab avalanches
High risk for slab avalanches builds up when we have wind during a snow fall, or when large amounts of snow gets transported by the wind. Then the dendrite-shaped snow flakes breaks into small particles that adhere to each other and form a denser layer of snow. We get wind packed snow.
If this wind packed layer is not well bound to the previous snow layer, the whole slope can slide at once. Triggered at any point of the slope, a crack spreads with supersonic speed underneath the packed layer, and the whole top layer or several layers slide at once.

By lifting up a shovel full of snow you will see if the snow grains are attached to each other or not. Packed snow forms a little block, loose snow runs off the shovel and leaves a little mountain.
If the snow is wind packed there is a risk of slab avalanches. To get an idea of the stability of the snow pack on a typical slope you can dig out a pit, study the different layers, and perform the “shovel test” or “compression test”. How to execute this test is demonstrated in the video below.

When a skier releases a slab avalanche the fracture line extends with the speed of sound and the whole slope starts sliding. The fracture can happen high above the skier and he finds him or her self trapped in the middle of the sliding snow mass and cannot escape!

Wet snow avalanches
The wet snow avalanches we get mainly in the spring when the snow is wet all the way down to the ground. These are very heavy and even small ones are dangerous, like being stuck in concrete.

When do I need to watch out?

If different snow layers are not well bound to each other the upper layer can slide if it is triggered by the weight of a skier. When studying the snow pack you need to be able to identify potentially gliding layers and recognize bad connections between layers. This applies to all types of avalanches.

Bad connections between layers are:
– Changes hard-soft: Layers with a big difference in density do not bind well to each other. For example a layer of ice crust underneath a loose powdery one, or a compact wind slab on top of loose sugary snow.
– Snow on top of surface frost: Surface frost is the glittering crystals that look like a beautiful micro ice-landscape on top of the cold snow. It builds up mainly on shady slopes but can also build up during the night on south facing slopes. The crystals easily break off and they work like bearings for the snow on top, creating the perfect gliding layer.
– Hoar frost: Builds up in the beginning of the season when the snow cover is thin and the air temperatures are cold. The big temperature difference between the ground (0 degree Celsius) and the top of the snow layer (maybe -20 degree Celsius) causes the transformation of the snow into big icy grains that becomes a loose sugary layer. The thicker the first snow cover of the season, the less hoar frost is built up. This bottom layer (good or bad) normally stays the same for the rest of the winter.
– Snow on top of sand from the Sahara: Desert sand is sometimes brought to Chamonix by the clouds. The snow typically gets yellowish or yellow-red. The sand causes a bad connection for the next snow layer on top.

Where do I need to watch out?

When scouting the terrain for hazardous zones, the steepness of the slope is an important factor. The slab avalanches are most common on slopes between 30 and 45 degrees, the steepness that is the most popular to ski powder in! But they can occur on all slopes between 20 and 60 degrees. Big loose snow avalanches are favoured on slopes steeper than 30 degrees, up to 60 degrees. On slopes steeper than that a lot of snow seldom sticks at all. Wet snow avalanches can slide down all slopes, even in flat terrain, below 20 degrees. The steeper the slope, the more the weight of the snow layers is forcing the snow in the sliding direction. If you have doubts, always choose to ski the less steep section of the slope.

Slope exposure to the wind also matters. The lee side of a mountain or hill will contain more amounts of wind-transported snow, and therefore “wind loaded” slopes are high-risk for slab avalanches. If the other side of the hill (exposed to the wind) is flat, even more snow gets transported to the lee side than if it is steep. Normally a cornice (a lip of snow hanging over the lee side) is formed. Little waves on the snow surface can also indicate where the wind has been blowing from, helping you to determine the lee side of the hills.

In the off-piste, always ski one by one, watching each other, and stop only in safe places. Never stop right at the bottom or in the middle of a slope. Avoid skiing in the middle of a big slope that ends up in a tight gully, where it is easy to get trapped in case of a slide.

Below I clarify some points concerning avalanche danger that are often brought up to discussion and that are sometimes answered inaccurately.

– Does forest protect from avalanches?
The trees do not anchor the snow, except for if it is very dense, too dense to ski. But the forest does shelter from wind and therefore the snow grains more often remain unattached and the slopes are less likely to slide as slab avalanches.

– Do ski and animal tracks guarantee for avalanche safety?
An avalanche can be released by putting pressure on a certain weak trigger point of the slope. Such spots can be hit by the first, the fifth or the tenth track! Animals do not know about avalanches.

– Does rough ground such as small bushes and twigs anchor the snow?
It often allows a lot air inside the bottom snow layer, which causes more hoar frost to build up. Therefore the snow pack can be badly bound also to rough ground.

– Can small slopes also be dangerous?
Depending on the amounts of snow that slides you can easily get buried also at the bottom of a small slope if it ends in a so-called terrain trap (gully, pit etc.).

– Has fresh snow settled after a few days?
Often new snow does not settle in a few days. An untouched slope can still be dangerous many days after a snowfall. Sometime north facing slopes stay avalanche prone all winter!

– Does the collapsing of a snow layer, making the “whumm” noise when you step onto it, indicate that the snow settles?
The “whumm” sound indicates great avalanche danger – turn around!

– Is a slope where an avalanche has never happened safe?
Some places get a reputation of being avalanche prone or safe, because often they are exposed to the same winds and temperatures, but the day that these conditions change the avalanche risk will change too. You cannot generalize mountains or slopes.

– Are often skied slopes safer than seldom-skied ones?
If a slope is skied after every snowfall the different layers are broken up and better packed together then if the slopes remains untouched all winter. In Chamonix, most 30-45 degree slopes accessible from the lifts gets skied out between every snowfall, which is why they stay safer than similar slopes in more remote places that sees less traffic.

Where do I get the information? 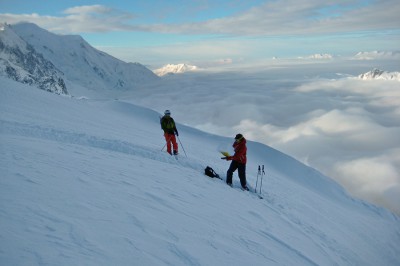 Go outside and have a look yourself! The best is to stay updated on the snow conditions all along the season. If you are a visitor, you should ski with someone who knows the history of the snow pack or dig out plenty of pits to see how the snow pack looks like. Perform the “shovel test” to confirm or complement the regional avalanche report.
Stay updated with the local weather report and look at maps and wind directions.

Unfavourable conditions are:
– Strong winds (above 50km/h)
– Low temperatures (under -8 degree Celsius) in the beginning of a snowfall, the snow is unable to bind to the surface.
– Melt crust layer, frost and, blank ice with snow on top.
– Places where off-piste slopes do not get skied regularly.
Favourable conditions:
– Low wind
– Temperatures just below zero degree Celsius, especially at the beginning of a snowfall.
– Rain that changes over to snow, the new snow is likely to bind to the surface.
– The slopes get skied regularly.

Read the regional avalanche report.
In Chamonix you will find it at the Office du Tourisme, Office de Haute Montagne, at the bottom lift station of all ski systems, and at Météo France – Bulletin Niege (in French).
You also find information about the current snow pack at Chamonix.com and at the mid station of Grands Montets.

You can listen to local people’s information, but do not believe everything!

What do I do in case of an accident?

This I will cover in a following article, but here is a short manual.

1. Call for help: Mountain rescue: PGHM Chamonix +334 50 53 16 89
General help central: France: 112, Italy 118, Switzerland 144.
2. Use your transceiver, shovels and probes. Just like you have practiced to use them before!
3. First aid: a. Clean the airways
b. Listen and feel for breathing and pulse. If not breathing, give artificial breathing.
c. If no pulse start CPR: 2 breaths followed by 30 massage presses, repeat until help is there.
d. A hypothermic person should be moved as little as possible to avoid the cold blood from returning to the heart.

Thanks for your attention! We hope that this information has increased you avalanche awareness. We are happy if we can help you to make wise decisions in the mountains and recommend you to take an avalanche safety course for further knowledge and practice.

We offer 1 and 2 day avalanche awareness courses for off-piste skiers and mountaineers in Chamonix. Day 1 we cover the terrain reached from the lifts, looking at
– different types of avalanches, types of snow
– snow pack and how to dig out a snow profile
– influences: terrain, weather, wind
– use of avalanche transceivers and practice searching
– rescue techniques and how to organize a rescue
Day 2 we go ski touring in Chamonix and learn how to plan and organize a ski tour in the aspect of avalanche safety.