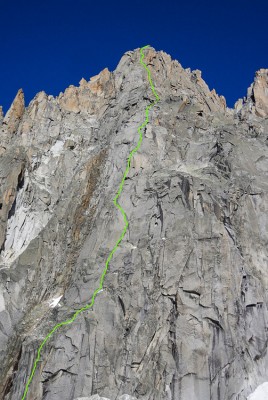 This 650m high granite pillar is a big Chamonix alpine rock classic on the most left one of the highest peaks in the group called Les Aiguilles de Chamonix. Grand Charmoz (3445m) is one of those prominent peaks that you look up at from the valley every day and dream to stand on top of.

The route follows cracks and dihedrals on this huge pillar, which is divided in two parts by a large terrace two thirds up. From these ledges it is possible to reach the Nantillon glacier and descend on foot. However, the Nantillon glacier, between Grand Charmoz and Blatiere, has huge serracs hanging off its top, which makes the approach and descent quite dangerous at times.

We first attempted the Cordier Pillar on the Grand Charmoz in the end of August 2009, starting from the first lift to Plan des Aiguilles. I then noted for our records:

“Stiff grades, in fact most pitches felt like challenging pitches of 5-6a, not much simul climbing terrain. The route finding was not obvious but protection always good.

Clouds caught up on us, started the rappelling about 6 pitches away from the summit. Rocks were tumbling down from every one of the surrounding peaks and the Nantillons glacier did not allow us a safe descent off the terraces, so we chose to rappel the bottom part too. Backed up every single belay with new prusiks. Descending the glacier rive-droite to the moraine, then walking all the way down to Chamonix. A very long day. At 9pm the Pizza-man in Cham Sud couldn’t work fast enough!” 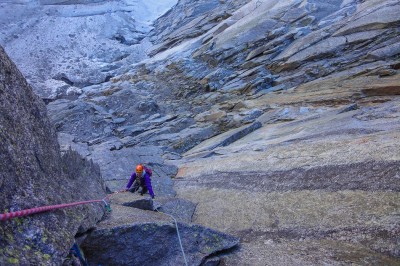 Two years later in mid September we finished off the route and finally got to stand on the summit of Grand Charmoz. With the first lift at 8.10 in the morning and the night being pitch dark at 9pm there was not much time to waste. This time we left sleeping bags, food and beer by the Plan des Aiguilles cable car to have a good nights sleep after the climb instead of walking down to the valley.

Apporach was quick (1h40) and the Nantillons glacer quiet. However the first few pitches of the route was looser then I remebered and very sandy. Higher up before reaching the big ledges, marks from falling blocks were frequent and the smell of gun powder still thick in the air from recent activity. The reason for all the sand became clear when reaching the moon-landscape of loose blocks on the terraces between the lower and the upper pillar. 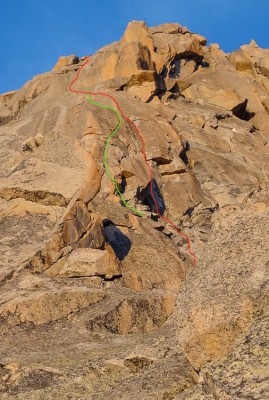 The upper parts on solid yellow and red granite was really enjoyable. To start with we climbed too far right (like many other parities before us). Still following nice hand cracks and dihedrals, so we didn’t mind. The various off-route and original lines comes together one pitch below the famous off-width pitch anyway. Like all big classics there must be an off-width pitch up high to humble and put some respect into modern climbers. But well equipped with two #4 camalots we had nothing to fear.

From there a quick simul climb to the top. Being sunny and warm we felt like we had all the time in the world sitting on the top, soaking in the views of the Mt Blanc massif. From here we’re looking down on most other peaks we’ve climbed here, as well as up on Mt Blanc.

To summarize we did 14 belays on the whole route and the climbing took almost 7 hours. Mostly we climbed in long (50m) pitches and on some easier sections with a running belay. The line is homogenous, direct, and mainly high quality rock even though exposed to rock fall in a few places.

The summit ridge of Grand Charmoz continues south, and another rappel route is offered in the guide book after traversing behind the highest summit. As that route would bring us down to the terrace closer to the glacier and then have us traversing in the loose blocks to reach the rappels of the bottom part, we decided to go back exactly the same way as we came instead. This did not pose too much problem when starting off with some really short rappels.

No major rope-jams, but as always rappelling is laborious and time-consuming. The last rays of sun fell on us, but the expected full moon was screened from us by Grand Charmoz and Grepon. So the darkness was thick around us during the last few rappels and the walk back to the mid-station.

Above, the great views of Aig Vert, Grepon and Mt Blanc from the summit of Pilier Cordier Grand Charmoz. More photos from the route in the gallery below.

– In times of increasing temperatures and melting of permafrost, one should research conditions before attempting any alpine climbs in the Mt Blanc massif.
– Guided alpine rock climbing in Chamonix
– More photos in our Alpine Rock Climbing Album on Facebook.
– The old Piola guide book, which describes this route, is unfortunately out of print, but you can get copies from this book at Office de Haute Montagne in Chamonix.