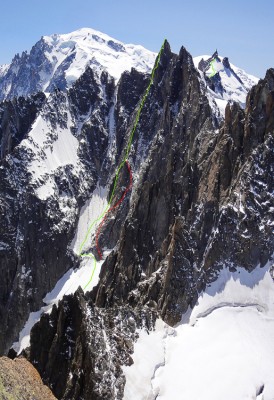 Having heard that conditions were good to attack this well recommended rock ridge, we thought we must take the chance since it is getting less and less frequented due to the retreat of the Envers de Blatiere glacier. The East ridge of Aiguille du Plan rises from a series of massive bergschrunds off this little hidden glacier in the backyard of Les Aiguille des Chamonix. This prominent ridge line in-between Pain de Sucre and Dent du Crocodile was first climbed in 1906 by Lochmatter brothers and Ryan, and later on alternative starts were added in adaption to the varying conditions of the glacier.

We are reading in the mid-difficulty section of Rebuffat’s bible “The Finest 100 Routes” – that every wannabe alpinist needs to climb through in order to become an accomplished mountaineer – but the topo says little of the actual grades on the climb (D+, 500m, cracks, in Piola’s topo of Envers des Aiguilles).

On paper it looks like a fairly easy day out, but coming across the video from Arete Ryan by TV Mountain, Part 1 and Part 2 we realized that there would be mostly proper pitch-climbing…a few cams extra and 2*50m ropes went into the back packs. 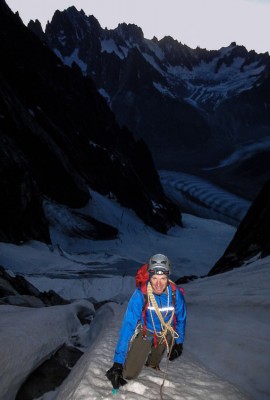 The L.Theirry variation appealed to us since it avoids the cold and unpleasant climbing in Couloir de Crocodile, thus also shortening the time of exposure to rock and ice fall before reaching the key crest. As we were able to zig-zag through the bergschrunds the approach was quick and we reached the little secondary couloir (between the “rognon” and the SE flank of the E spur of Aig du Plan) before sunrise. After a short scramble up this dry couloir, we finally had hands and feet on solid granite, gloves and crampons off, and ready for a long day in the warming sun.

From the first pitch the climbing in not easy in big boots. A slab leads up to a steep corner where you need to squeeze into a short chimney, the back-pack had to come off already. Gradually traversing to the right from there, relaxing climbing takes you to the key crest, where the two alternative starts join. The next step on of the ridge goes through a bunch of corners and chimneys. New muscles and new techniques to squeeze up, around and over are being discovered… 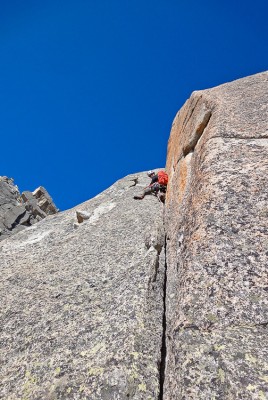 Reaching the next good view point on the ridge, we spotted a really nice looking corner crack that we assumed must be the famous “Grad-ma crack”, but 2 pitches later we realized this might have been a bit too far left and that Grand-ma crack in fact pretty much follows the key crest. The cool hand-jam corner we did climb took us to even steeper and wider cracks before we recovered our position on the crest. Probably we climbed a few pitches of “Ne Tirez Pas Sur le DTN”.

Climbing along the crest is a mix of slabs, cracks and horizontal line-dancing. The drop to both sides, the general increasing steepness of the ridge, and wider views gives a feeling of exposure and awesomeness. Clear skies and low winds in the Mt Blanc massif makes the challenging climbing an easy life.

With just a few pitches left, the route takes off slightly to the left in order to find the weakest line through the steep shields of the summit pyramid of Aig du Plan.
A fixed rope has been installed to aid the climbing up a steep crack, finishing on a ledge traversing further left. Around the corner some pitons have been installed for aiding the last steep step before reaching the easy ground shared by the Midi-Plan traverse to the summit. 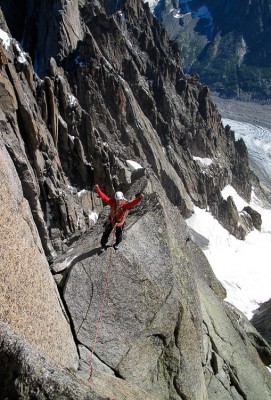 From the summit of Aig du Plan, it looks like you could almost throw a snow ball over to Aig du Midi. Getting there offers a quick download to the valley, instead of walking down the steep and crevasses Envers glacier to the Requin Refuge and returning by Mer de Glace to Montervers the next day. So reversing the Midi-Plan traverse was our obvious choice of descent. Although it took us 2h30 to reach the cable car, it was a good and safe decision.

The climb took us about 9 hours from Refuge Enverse des Aiguilles to the summit of Aig de Plan, 9 July 2012. Apparently the first ascent by Lochmatter/Ryan was done in 12h40 from the Montenvers train, which means they kept about the same speed as us navigating through unknown terrain with considerably disadvantaged equipment and possibilities for rescue, impressive!