This week we are featuring some popular ski tours in Les Aiguilles Rouges in Chamonix – More precise from the Index chair lift in Flegère, over various mountain passes, and skiing down Vallon de Bérarde to the train station in Le Buet. Described here are a few classics, but there are many more, less frequently skied routes and variations to ski in this mountain range.

We like the Aiguilles Rouges ski tours because you hike up on south faces and ski north faces. This often means enjoying the sun on the way up and skiing cold powder on the way down until late spring. Also, the north faces of Vallon de Bérade tend to be sheltered from wind and the snow stays really good for a long time after the last snow fall.

The photo above is showing the Flegère side of Les Aiguilles Rouges and the first ridge to climb over. The full ski tours are drawn in the same colors on the map below.

Please note that this post is supposed to serve as inspiration and a large overview of the routes, not a comlete topographic description of these ski tours. Click on the photos/map to enlarge. 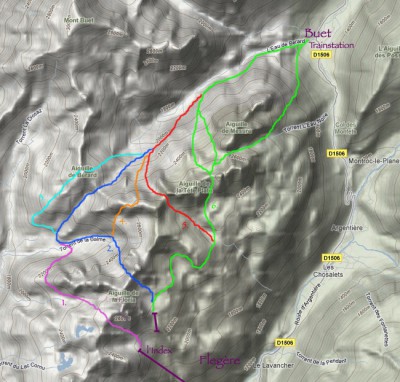 1. (pink) Col de la Floria. Skinning straight up from the Index chair lift and boot packing the last bit over the ridge (1-1.5h). The ski down the north face is rather steep (about 45 degrees) and in some places a bit exposed. This year the snow cover is good and skiing straight down the north couloir is obvious. Best is to continue down to the valley floor and hike up straight towards Col de Bérarde (another hour) or the Keyhole, but it is also possible to join the second part of the Crouches-Bérarde traverse.

2. (dark blue) Crochues-Bérard. It is the biggest classic and most mellow of these ski tours. First hike starts from the little téleski continuing up to the right of the top station of the Index. On skins first, then a short boot pack up to Col de Crochues. The following, long traverse under Aiguille du Belvedère, is skied before putting on the skins ones again going over Col de Berarde. This long traverse is exposed to avalanche paths from the slopes above. The skiing down to Buet is cruising on open slopes, perfectly steep for playful powder skiing. 4-5 hour in total.

3. (light blue) Keyhole. A variation of Crochues-Bérarde, ascending the ridge left of Col de Bérarde. It takes about 1 hour to reach the ridge, which you cross over through a narrow rocky passage (nicknamed the Keyhole).

4. (orange) Glacier du Mort. This route also starting by passing over Col de Crochues but re-ascending right of (before reaching) Col de Bérade after traversing below Aig. du Belvedère. The long boot pack (1-2 hours) goes straight up a south facing couloir, then following the summit ridge to the right towards Pointe Alphonse Favre. Skiing 35 degree steep snow fields (with some rock bands present) down to the valley floor of Vallon de Bérade. 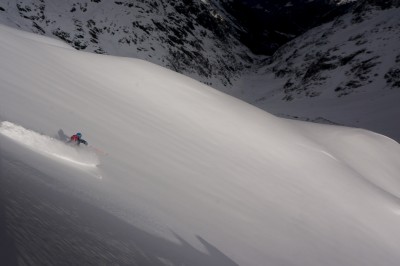 5. (red) Col de Belvedère. By not hiking up straight from the little téleski (right of the top of the Index), but traversing further right, below the first rock ridge, we reach Lac Blanc after a small hike. Col de Belvedère is the col straight across the lake, on the top of the large south facing bowl (which also is a very nice ski, should you choose to turn around at the col). Skiing down the north face, the first 100m is 50-45 degrees. Unless snow cover is really good, a small rock band is present below, which you pass skiers-left and then ski more moderately steep slopes down to the Vallon de Bèrarde.

6. (green) Col de Beugeant. Also from Lac Blanc, but ascending right of the lake towards the next large bowl (Combe the Beaugeant). Certain passages can be exposed to avalanches in case of wind deposited snow. Before reaching the top of the bowl, a small traverse to the left on rocky ledges leads to Col de Beaugeant. The traverse is about 100m of a bit exposed climbing on rock/snow. The first steep part on the north side (possibly a cornice) can often be skied from the top, but there is a 10m fixed rope to hold on to should down-climbing be necessary.

The saying goes that one sporty fellow has done this ski tour 500 times, up to 3 times per day. Don’t ask me why… but we agree that it is great route; only one 900m vertical ascent awarded with 1600m vertical of skiing.

By traversing right after the first 100m of skiing it is also possible to pass though col de l’Encrenaz and ski straight down towards Col des Montets.